Sophie kinsella– can you keep a secret?

So this book is about we girls!! I mean we really can relate to this. How is it like when you just can’t say everything , the way you feel , or your opinions etc.,etc just not to hurt others and turns out to be secret. We all do have many many secret opinions right? We can’t let it out, so do emma corrigan. Emma is like typical go girl! She hides many things from her friends circle, and ends up in a mess, and i almost forgot to say even though this book got released in early2000’s it has got very good comic sense, its really funny … As i said we all girls can relate to emma, and one day everyone comes to know about it! I know almost everyone knows or read this book , if not girls please just hurry up! Its just not that we could relate but its funny too! About the author i could say … Well, her vocabulary is really damn good, you know the each and every expression how the character must have reacted is written with the perfect word..

Reviewing shopoholic series is where i look upon to do so. There isn’t much of intense plot yet it makes everyone keep engaging. Focusing onto the book, it makes every reader to travel along with rebacca. For first time readers rebecca is the main character of this book and she is everyone’s best friend. There’s no chance for anyone not having a friend like her or atleast knowing that kind. She is a bit reactive but sensible. Now in this story, she’s married and a mother of a pre school daughter. She gets a chance to move out of London to L.A because by her hubby who works for celebrity. As a Rebecca everyone wants to get into touch with celebs , boast about it and dreaming of oneself featuring in Hollywood and later realising that life isn’t gonna be that ease as we wanted it to be. There were many parts in which i laughed out for her silliness and the mess she creates by herself. This can be picked after a good thriller novel.

This features on totally different new world where one could hear other’s thoughts which is called ‘noise’ …, Yes it is wierd but cool. It’s more sci-fi themed. First few chapters is focused upon two characters, Todd and his dog which speaks. Eventually every character gets focused . I really liked the way author carried out the presence of each character till the end. And the next main character is a girl named Voila from other world who meets Todd , she’s silent but sensible. The story revolves how fast these two escapes from the rivals . I just mentioned the main characters of the story , there are many characters too. My favorite parts are Todd ‘s opinions which were funny at times and the last few chapters are beautifully expressed and bit emotional .I would recommend this book for 13+. 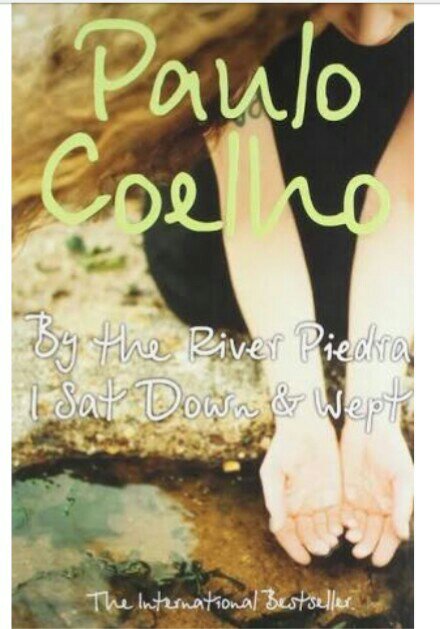 The story is about two childhood friends who were affectionate reunites at early 30’s . Even if you could predict the later part of the story , it was soo cute! It’s described in point view of the girl’s . Girl’s character is described very strong and wise . She thinks about him all the time in the river Piedra :cryings , happy tears and suddenly she meets him …Its a novella so there wasn’t any unwanted part in the story ,.. Religion facts , perceptions , argumentsetc.. did involve till the end. They meet, they smile, small hangouts turned into vacation, fear, second thoughts, kisses , wine and ends in the river where she wept about him.. just a cute ending..😍😍 Just read this book during car drive with family.. it’s worth over boring family convos

Tell me your dreams – sidney Sheldon

Well, it’s a thriller… Based upon multiple personality disorder (mpd). Ashely, toni, atlette are different versions of a same girl. One is rude, one’s talented, and an introvert. EAch version has a story but it’s not that explicitly described till mid that everyone is the same girl… It’s a thriller so obviously there’s a murder scenario. It’s was really tempting before the author describes the character is diagnosed with MPD.. after that you could itself frame it , what’s gonna happen at the end.. i liked the last few lines at the end of the book where she becomes more independent strong girl., My favorite part is the main character is an introvert she won’t be knowing on her other versions of herself, she’s trapped in many situations , lawyers can’t let a statement of accusation on her.. i would rate as 3.5/5 . It’s a good book for beginners

As i was just wandering in library,my librarian she herself got fed up of me as i was just standing front those huge rows of books and thinkin which one to choose this week… She suggested me this book.So i really must say like ‘what a book!’ , really loved it man. This story is soo damn amazing, i mean see the last book which i read was …i jus don’t wanna say about it, so very disappointng .NVM.. coming back to this, this story has many characters , i found it that way ..as i am bad in remembering names of it. The way each and every characters were introduced or described is soo perfect, it wasn’t exaggerated, it starts by a girl who was about to be murdered but then somehow she got back , but then she has memory loss so obvious as in tittle . The main plot of the book is Dermis, a tycoon . Though he’s an saddist , he was so right in his view. That’s how tycoons are! I mean they just do anything for money, he had luck, more over a handsome face , he took an advantage of it. I really liked a point in where, another person intro comes, and Dermis at a point he has to come down, let it be any person on earth , how rich they may be , there’s always a person better than us. Okay let’s not get too much philosophical on life, ik that sounds like a old granny with kittens advising to ppl, nvm. Coming back, in first few chapters as the goes on suddenly new characters gets introduced, as you read on and on , they are inter connected , with situations occurred in the past. I should also say you that, despite of this book is preceeded by , i never knew that it had a first part, jus think about it, the way the sidney carried it. Catherine has a memory loss and she gets back with a person who tried to kill her, he never shows anything out, and plans again for it, but after few days… By that time she likes another guy, Dermis kills him. She tries to recover through a psychiatrist, she falls for him again, this time Dermis never knew it, coz he was stuck up with rizzoli, another intense character. I really liked these characters so i mentioned it, there a other characters too. I would recommend this for all, but try reading the first of it, i couldn’t get that book. Let me know about it, suggest me about how my reviews are via comments or text! Cheers😋

I was sort of disappointed not after reading this ,but mid way itself! There are stack of unread books in the loft, i bought this book by around 2010 or 11 something like that, i don’t remember reading this at all, and so i thought to read it but wait i very well remember why i bought this book coz ‘the tittle’ ‘the cover’ you know sounds good for a girl who’s at early teenage. Coming to the main point, it goes like , ‘a four murders , who killed them?!’. The concept was good but it wasn’t a page turner. I felt at starting everything was going okay, how tom and his ex-girlfriend work on this case for an innocent guy who was suspected to be the murderer. Each chapter goes like, a each and every character, eg. Chapter one-Tom , 2-nikki.. like that, what was their opinions on that though it was mostly Tom’s.. nvm. i found it very peculiar. The reason why was i disappointed coz of how could be the main character of this book could be the one who killed them? Then why helped that innocent guy coming out of jail? This isn’t Pattreson , he’s more, its always the someone who’s not main plot of the story would have done the killing part.There was witty lines . I wouldn’t recommend this book to read on a normal basis, but when you are really damn bored or to just pass time or off your routine may be, just may be you can go with this. It’s like one time reading, i just skimmed the last couple of chapters.. Basically once if we start reading a book or watching a movie we wouldn’t pause right? So its just like that… I wonder right now also jus bcoz of the cover page , tittle’ i bought this book?! Duh! TBH i was kinda judging people(looks) before in my early teens!not now.. Ik it sounds bitchy nvm! Toodles!!☺

Well, ‘malice’ the word almost says the story. It goes like this, a girl named Grace adams , who faces a really tough life and she overcomes it,she never tries for it but she is a girl who doesn’t get a chance to do it so….she accepts it and go with the flow. Generally how a book is about when it starts from sad to happy ending, well this book also the same way,but it’s different ,one of a kind! It starts by ,Grace at a early age itself she’s been sexually assaulted by her own dad,she kills him, spends time in prison ,well its sad at the beginning to read it though, don’t stop it there, there’s a twist in there, after her life in prison, she starts to explore only by then.She gets a job and finds a man of every girl’s life, saying about which hasn’t even thought about! I liked this book because even it was very grieving at the begging, i guess it ended it really well, the characters which the author described was really intense,we all must have met or heard about each one of them(characters) atleast once in our life., Atleast like grace! Well, i would not suggest this book for a beginner’s, amateur or booklovers will surely go for it!